Do you know your Mojitos from your Mai Tais? Your Cosmos from your Cuba Libres? And even your Tequila Slammers from your Slippery Nipples?

I love a good cocktail  – and if it was made by a young Tom Cruise, a la Cocktail the movie circa 1988, that would definitely be a bonus.

Last weekend, I invited a few of my lovely friends over for a girly night in alongside a bottle of Bacardi’s latest addition to its rum family – Bacardi Oakheart. I was sent a whole range of cocktail recipes designed by Bacardi ambassador and mixologist,  Shervene Shahbazkhani, using seasonal ingredients and fresh flavours.

I was slightly hesitant on opening the bottle as I already had my preconceptions on dark rum having tried similar spiced rum brands such as Sailor Jerrys. It has a tendency to be very strong with a bold smokey taste and Bacardi Oakheart wasn’t dissimilar but is certainly smoother than competitor brands. You’d have to be pretty brave to face a virgin 25mls swashed over a handful of ice cubes. Probably best us girls stick to the cocktails!

We decided to recreate the Match Point Moijto – taking obvious inspiration from one of my favourite times of year and the tennis tournament which takes place just down the road from me, Wimbledon. Summery matches that were made in heaven such as strawberries and cream, the 99Flake and West Country cream teas – I’ve another one to add to the pile: Bacardi Oakheart, mint, strawberries topped with soda and a dash of lime. Yum!

Place the limes, mint, strawberries and sugar into a sturdy glass and muddle to bruise the mint and release the lime juice. Add the ice and pour over the BACARDí OakHeart. Add soda water to taste and stir well. Garnish with a strawberry and sprig of mint and serve.

Tip: To release the full flavour of the mint, pop the leaves in the palm of your hands and clap before dropping into the glass, this expresses the oils and makes a tastier Mojito. 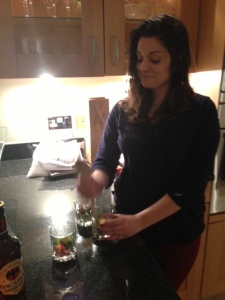 I was pleasantly surprised at how light this cocktail was; there was only a slight sharp kick of the Bacardi Oakheart. The squeeze of fresh lime certainly helped to cancel out the bitterness of the alcohol, making it extremely refreshing and pleasant to drink. If we hadn’t made them, I would have questioned exactly how many shots (if any) were inside – and that’s not because we were taking it easy… I assure you we were rather heavy handed! 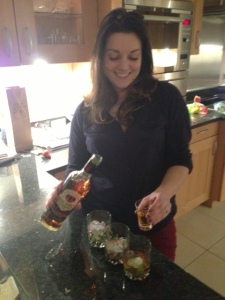 In go the shots…

A bug bear of mine is following recipes that have hundreds of different ingredients that you won’t use again. Not the case here. The Match Point Moijto is simple to create, uses minimal ingredients, and those that it does use are fairly inexpensive.

Another thought that myself and the girls had, was that it was very Pimms-esque, but the best bit.. is that Bacardi Oakheart is a spirit in its own right, weighing in at 40% ABV compared to Pimms at 18% ABV. After just three glasses of Wimbledon Cocktails each (for blogging purposes obviously), we were all feeling very jolly indeed! 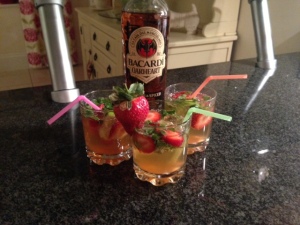 I could certainly see myself making another batch to take on a picnic with friends. Especially as it uses soda water to dilute the shots rather than sugary lemonade or coke – it made me feel a little bit better anyway!

Other recipes that I thought looked fab, and will certainly be giving a try are: 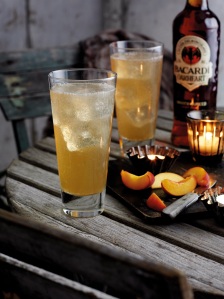 Simply add all the ingredients to a glass with ice.  Garnish with a peach slice

Simply build in the glass over ice

You can buy your very own bottle of Bacardi Oakheart at all major supermarkets and good independent retailers for £18 per 70cl or £23 per 1l bottle.

NB. I was sent this bottle for review purposes but all opinions and thoughts are my own. AND don’t forget to drink responsibly!

3 thoughts on “Cocktails with Bacardi Oakheart”