Monday evening – the perfect day for an English sparkling wine tasting. I am particularly interested in the rising trend of English wines – they’re appearing more and more on restaurant wine lists and stocked on supermarket shelves. What’s the fuss, I hear you say?

On entering Chisou in Knightsbridge, I was interested to see just how well these matched with their Asian dishes. On the menu we had: 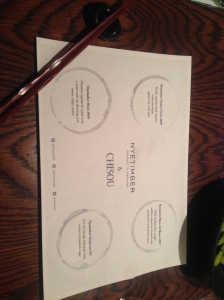 Having heard of, but never tasted Nyetimber, an English sparkling wine hailing from West Sussex, my preconception of English sparkling in general was that it was always desperately trying to compete with its fierce and long standing competitors from the Champagne region, and not quite hitting the mark – how wrong was I; compete it did!

I was most surprised by just how versatile the bubbles matched with the subtly flavoured cuisine. The yuzu (a chinese citrus fruit, often likened to a lemon and lime in the shape of a tangerine) used within two dishes was almost like a sweet and sour balsamic dressing so to find a wine to pair with this and not overpower it I can imagine to be quite challenging.

All of the wines we tasted had been sourced from the Nyetimber estate in West Sussex and this is very unusual for a wine and ultimately means that the wine maker, Cherie Spriggs, has complete control over quality and the blend. 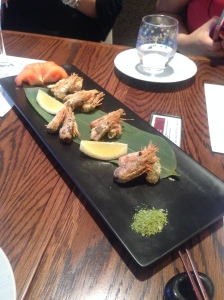 Another top tip I picked up and will most definitely be finding an excuse to try this one out is pairing a Classic Cuvee with fish and chips. The high acidity of the wine cuts through batter or tempura and also matches perfectly with fish. Hence it’s pairing with the amaebi head crispies. David from Chisou mentioned these battered prawn heads that we were treated to were a real delicacy in Japan. Although I wasn’t a huge fan, I can certainly see the draw – they were full of flavour and the shell added a true crunch. What made it was the green tea sea salt – very moreish but I suspect not all that good for you!

The sea eel has to be the dish that will stay with me. A texture of pork belly and a taste so mild, almost like a buttered Seabass covered in sticky sweet BBQ, sesame seed, cinnamon marinade, it was hands down the most unusual food I’ve eaten to date. The Nyetimber Demi-sec was sweeter than the other wines with 44mg of residual sugar in comparison to around 11mg but yet it was still refreshing, full of citrus flavours and not too syrupy like some sweet wines can be.

The verdict? English sparkling wine is a hit! I will be looking out for Nyetimber and for those special, special evenings maybe even a bottle of Rose 2009 – it’s a true fruity, beauty with a raspberry, redcurrant tang and ruby red glow! If you’re in the Knightsbridge area, I highly recommend trying out a selection of Chisou’s authentic and beautifully presented food with a glass of Nyetimber for good measure!

Bottles are priced at around £30 and can be purchased from Waitrose, Majestic and the Nyetimber website. Just a note, Waitrose have these bottles on offer until 29th April 2014 – £23 a bottle.

Ps Look out for 2009 and 2003 vintages – thanks to favourable weather conditions, they’ll be tasting very well indeed!

NB – I would like to thank Mark for the kind invitation to the tasting and also to Sophie and David for a very informative evening. Plus thanks to the staff and people behind the scenes who served up the delicious array of Japanese nibbles.