April 19, 2015April 19, 2015 • thatgirlsgotanappetite
Kerstin Rodgers aka MsMarmiteLover, a name most food bloggers are familiar with. Yeni Raki, not so much. So when I was invited to an evening of Yeni Raki hosted at Kerstin Rodgers underground supper club in Kilburn – I was in! Hands down.
Let me explain, Raki is a viscous aniseed flavoured spirit popular in Turkey, likened to Greek Ouzo or even French Pernod – however, Raki far less harsh and barely an after taste making it perfect to enjoy with food. When added to water and several ice cubes, the drink turns a cloudy colour which is exactly how it is meant to be drunk – long rather than in shots but of course the latter is possible for the party animal in you! 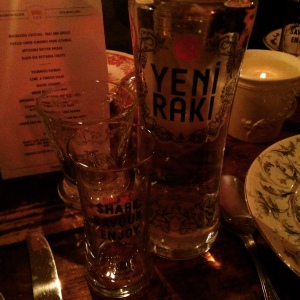 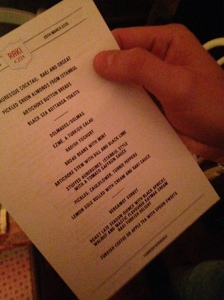 Kerstin was rich with stories from her recent stay in Istanbul. From top tips (white wine soaked vine leaves – of course, why did I not think of that?!) to showcasing her authentic ingredients picked up from Turkish markets – take the botargo (red mullet roe, salted and coated in beeswax to preserve it for freshness) served on crostini and dehydrated aubergines. 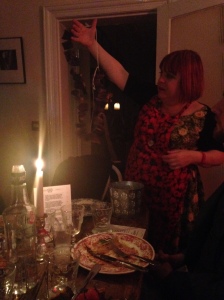 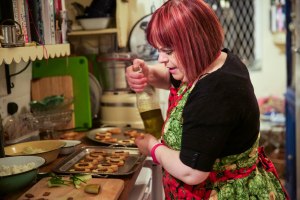 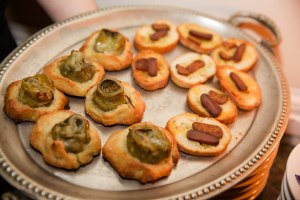 Think kitsch, that’s the word that springs to mind for me when describing Kerstin’s place. We took our seats at the long picnic bench with mix matched chairs, diningware and cutlery. A room full of characters, already the evening was far from boring – I was sat next to a charismatic cocktail advocate and brainchild of the Beehive in Brixton (definitely more on that venture very soon), infamous Telegraph food critic, hands down one of the nicest PRs I’ve met and a member of the delicious magazine online team, I suspect this is how many of Kerstin’s supperclubs usually feel – bringing passionate foodies together from a variety of backgrounds, all with the love of food in common. 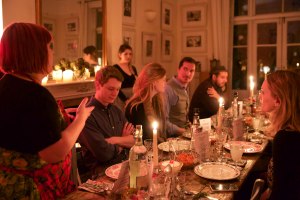 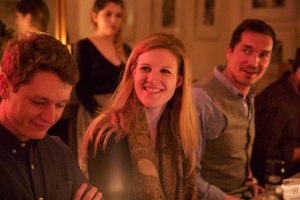 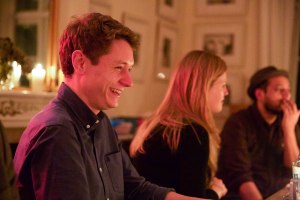 Up first a fabulous mezze platter and what was most noticeable was the lack of carbs on the menu – no bread like the majority of European meals. My favourites were the Ezme (a turkish salad, almost like a tomato salsa), vine leaves and sensational broad bean with mint and feta cheese.
The tag line for the evening was ‘unrush your world’ which is certainly in keeping with the Turkish culture for sharing dishes and taking the time over meals with friends and family alike. The team at Yeni Raki are on to something here.. 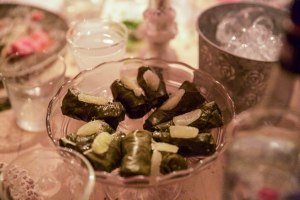 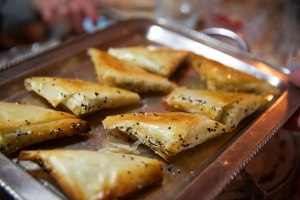 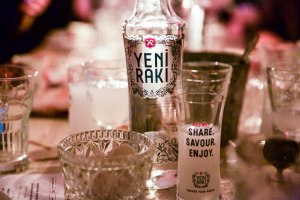 The dishes just kept coming and coming, three mains were en route – those dried aubergines were back and this time stuffed with couscous in a tomato saffron sauce.  Not only has Kerstin been busy travelling and picking up ideas for this Turkish delight but she’s also been beavering away on her next cookbook, based around Vegan recipes that will launch this April. The artichoke stew with lemon and dill was also on the menu, and certified vegan, (you’d never know..). 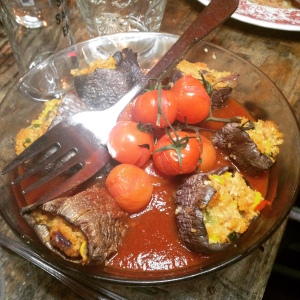 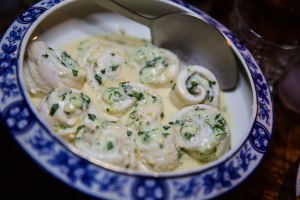 Stand out dish for me was the either the fish or the sorbet. A light and creamy sauce poarched the lemon sole fillets which had been rolled into mini roulades with a dashing of dill. The Yeni Raki in this sauce was splendid and not overpowering at all. It certainly would make me think twice about potentially cooking with the spirit – there’s most definitely a place for it within the kitchen! Below is an image of the delicious and demure bergamot sorbet, a beautifully delicate palate cleanser with a tangy yet fresh citrus burst of flavour. I’d love the recipe for that one, Kerstin, if you’re reading! 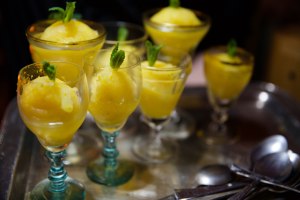 The food, the atmosphere and company was divine, still undecided on Yeni Raki but what I do know is that I greatly enjoyed learning about the spirit and the food whilst unrushing my world.

Thank you to Rebecca and Rose at Story PR, Kerstin Rodgers for her incredible cookery skills and cleverly put together dishes, not forgetting the folks at Yeni Raki for the invitation and the selection of images above.